Alexis McGill Johnson, Planned Parenthood's acting president and CEO, said the organization's nationwide network of health centers will remain open and work to make up for the loss of federal money.

"For nearly half a century, Title X has ensured that those struggling to make ends meet or who don’t have health insurance can access services like birth control, cancer screenings, and STD testing and treatment in their communities," Johnson said.

Johnson predicted that many low-income women who rely on Planned Parenthood, which is the nation's largest abortion provider, will "delay or go without care."

Today, the Trump admin is forcing us out of the Title X program — our nation's program focused on family planning, of which we serve 40% of patients. This is a *direct attack* on Planned Parenthood and on our health and rights, and we will not stand for it. #StandWithPP #ProtectX 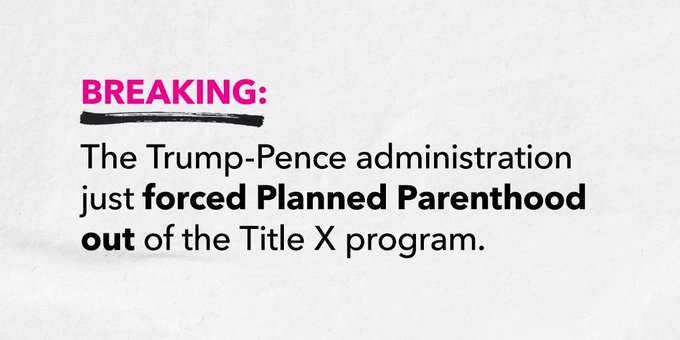 Responding with its own statement, the federal Department of Health and Human Services said that Planned Parenthood affiliates knew months ago about the new restrictions and suggested that the group could have chosen at that point to exit the program.

"Some grantees are now blaming the government for their own actions — having chosen to accept the grant while failing to comply with the regulations that accompany it — and they are abandoning their obligations to serve patients under the program," the department said.

Montana Republican Sen. Steve Daines said that "taxpayer money no longer going to the nation’s largest abortion provider will now be available for community health centers across Montana.” He noted that there are far more such health centers than Planned Parenthood clinics in Montana.